Morocco is the ideal destination for an adventure trip for those who love nature, sports, food and wine and contact with local people.

Morocco is a state of North Africa and is characterized by deserts and mountains. It’s washed by the Atlantic Ocean and the Mediterranean Sea.

It seems to be born for those who love travel as an experience, with its profound diversity, its population that mixes Arab and Berber roots with strong traditions, its ancient history, the infinity of the desert and the ruggedness of its mountains and then dive into the sea.

From the most tourist areas to the unknown ones it offers different type of tourism, with hospitality in five-star accommodations or the warm welcome of a guest house.

In addition to the sports and adventures mentioned above, Morocco offers wonderful locations that are absolutely worth visiting, including: The country hosts many natural parks and reserves, including the Atlantic and Mediterranean coasts, oases, deserts and mountains, which modify the landscape in an unexpected way.

Park located at the mouth of the Souss and Massa wads and Rif natural reserve: it’s the ideal environment to see flamingos, cranes and hermit ibis.

Dakhla Bay: home to the last monk seal colony in the world.

Dadès Valley which, after crossing the palm grove of Skoura and the Rose Valley, ends with the Dadès and Todra gorges, characterized by overhang rock.

Oasis: patches of luxuriant vegetation that stand like mirages in a stony landscape of mountains and contrast with the nearby desert. Figuig, one of the most beautiful oases in all of Morocco, where only very few tourists go, is made up of seven traditional villages in the desert, surrounded by 200,000 date palms; the oases of the Draa Valley, to be covered by quad.

Beaches: the Moroccan coast runs from the Mediterranean to the Sahara Desert and boasts beaches for all, including coves, cliffs, fine sand. Among the beaches where it’s worth spending a day there is Plage du Marabout, spectacular with rugged and wild-looking rocks and a mausoleum of a saint (marabout, indeed); Yellich, from which you can reach an islet on foot; Plage Robinson, in Tangier, from which it’s possible to walk to the Grotes d’Hercule, the mythical home of Hercules. For photography enthusiasts, from inside the caves you can see the Atlantic from an opening similar to a map of Africa.

Deserts: Moroccan deserts range from soft and sinuous dunes to earth and rock (hammada). One of the most striking is Erg Chebbi, characterized by pink-golden dunes and, at sunset, take on orange, pink and purple shades; the other one is Erg Chiagaga, where you can meet the Berbers, with their blue robes and stay in one of the small camps and admire the spectacular night skies;

Mountains: High Atlas is one of the most spectacular mountain ranges in the world, with its villages perched under snow-capped peaks. Jebel Toubkal is the highest peak in North Africa. In the Anti Atlas it’s worth staying in a traditional house in a village between the palmeraies and the pink-golden mountains; the Middle Atlas is ideal for day trips in hills and forests; the Eastern Atlas is characterized by barren red mountains.

Moroccan cuisine, with a thousand-year tradition, is one of the most appreciated in the Middle-Mediterranean. The invasions and commercial contacts with the different countries over the centuries have contributed to creating a fabulous mix with strong, but well balanced flavors, and the aromas of spices.

Perhaps the best known dish is cous cous, in its infinite variety of combinations of meats, vegetables and aromas according to the region and the season of the year.

Equally well known is tajine, a chicken or fish stew, accompanied by vegetables and fruit, which is cooked in the terracotta dish from which it takes its name.

Very particular is the pastilla, a thin puff pastry with pigeon meat, boiled eggs, almonds and honey. All sprinkled with cinnamon and sugar. There is also a variant with fish.

Briouat is a minced beef or chicken pie.

To accompany delicately spiced dishes, in addition to the excellent Meknes wines, it’s recommended the fragrant mint tea, served with shugar and with a fresh mint leaf in small glasses. In Morocco weather is sunny for most of the year and the weather is mild in all seasons.

Along the coasts the climate is temperate, with pleasant summer temperatures and mild winters.

Inland, the heat is dry in summer (with averages around 38 ° C), while in winter the weather is mild during the day and the nights are cold, especially in the desert and in the mountains.

In winter there are heavy snowfalls on the Atlas and it is the season in which the rains can occur more frequently.

When you spend a night in the desert, don’t forget to look at the sky, it will be the first time you see so many stars.

The feeling of the sand under your feet is amazing, but don’t take off your shoes when you’re in the desert, and don’t sit on the ground without even a carpet, because you might meet some scorpions.

Consider being in an African country, where the rhythms and customs are different , so be patience and flexible. 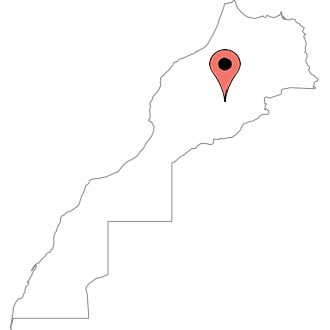